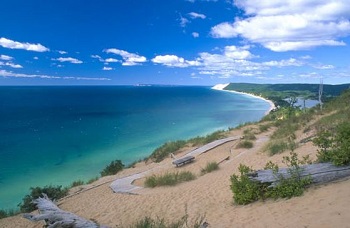 Photography by KenScottPhotography.com
Located along the Lake Michigan shoreline in Leelanau County, Empire is about 30 minutes north of Frankfort. A small village of about 400 people, Empire is a destination for fishermen, nature enthusiasts, beach lovers and ice explorers. Discover Empire Bluffs, which offers the breathtaking views of Lake Michigan and the Sleeping Bear Dunes. Walk on one of the many trails within the natural area at the south end of Empire. Empire is home to the Empire Asparagus Festival during the month of May, which is a unique celebration of Spring.

Top things to do and see in Empire 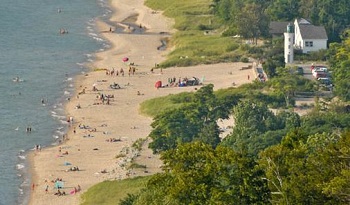 Manning Lighthouse at Village Park beach
Empire offers a very wide mix of shopping that offer everything you need while visiting this beautiful town nestled in the heart of the Sleeping Bear Dunes National Lakeshore. With a compact and very walkable downtown you’ll find everything from local art, artisan handmade chocolates, friendly restaurants and a well stocked hardware store. Within a short walking distance of downtown Empire, you can explore beautiful beaches, the Empire Area Museum and South Bar Lake. 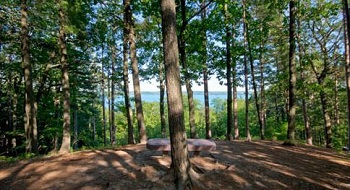 A trail within the Sleeping Bear Dune National Park.
Home to the visitors center for the Sleeping Bear Dunes National Lakeshore, Empire is often a first stop for people looking to experience the beautiful dunes and trails along the Northern Michigan Coast. Empire has many of its own trails, including the Empire Bluffs Trail which has a spectacular view of the coast of Lake Michigan. Just north of town is the Chippewa Run Natural Area with 112 protected acres of natural beauty. 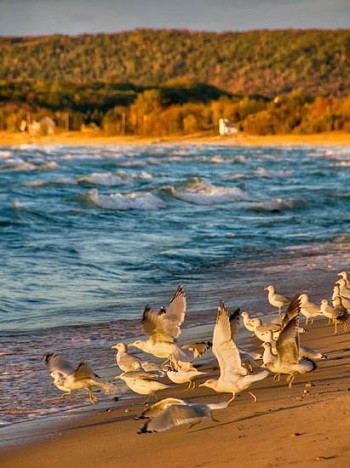 Discover More Things to Do Near Leelanau County...

Things to Do in Leelanau County -- In addition to Fishtown in downtown Leland, be sure to visit some of the other attractions found in Leelanau County.
Things to Do in Benzie County -- In addition to sandy beaches along the Lake Michigan shoreline, the county is home of part of the Sleeping Bear Dunes National Lakeshore, lighthouses at Point Betsie and Frankfort, and the Betsie Valley Trail for hiking and biking along 22 miles from Elberta to Thompsonville.
Northwest Michigan Activities & Things to Do -- While in Northwest Michigan, visit beaches and lighthouses, antiques, art galleries, casinos and wineries and breweries, and more.
Northern Michigan Activities & Things to Do -- Northern Michigan offers many fun things to do for the entire family whatever the season, whatever the reason!
West Michigan Things to Do -- Check this site out for West Michigan activities in the towns of Manistee, Ludington, Pentwater, the Silver Lake Sand Dunes and more.